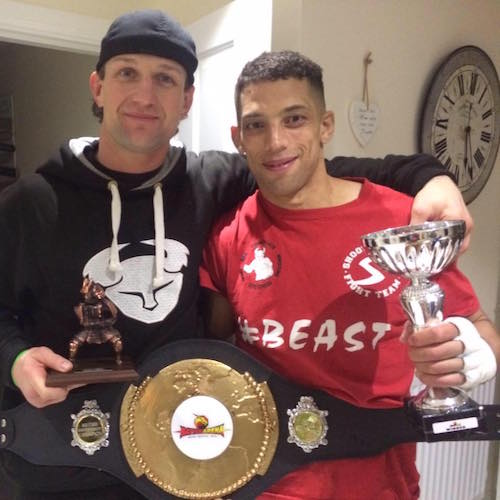 Title and Coach of the Year Award for Tap or Snap

Battle Arena MMA 38 took place this Saturday in Leicester UK. Tap or Snap from UK had a tough and successful weekend.

The evening started with JP Musson’s fight against Andreas Evrick from Trondheim MMA Norway. The fight was a A-class fight in -93 kg. Unfortunately Musson was  caught in a triangle choke at 0:43 in round 1.

Next fight for Tap or Snap was Benjamin Dennis vs Karl Wareham from Kaobon. A title fight (Battle Arena British Title in -77 kg) where Dennis was the stronger fighter and winner of the title. Dennis thoughts after the win:

Well after a log hard training camp, getting up at 5am running, swimming, biking, then going work, then back to training. And having Christian Smith, Owen Comrie Russell, John Wall and Maxine Leeson Smith pushing me physically and mentally all the way, it all paid off last night. To see my catch win catch off the year and to back it up with winning the battle arena welterweight championship just make it all worth it. Hard work dedication 100% pays off. Thank you everyone who was involved in helping me to this point.

Head coach for Tap or Snap, Christian Smith, then crowned the evening when he was awarded the Coach of the Year for 2015. Congratulations!