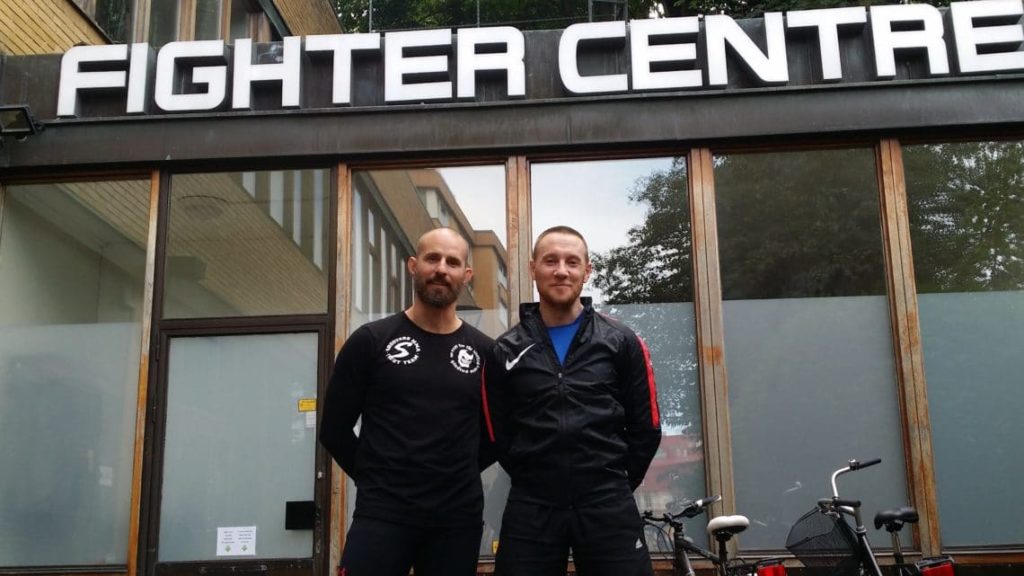 Conor Mc Donagh from Ireland will take the position as a Strength & Conditioning Coach at Shooters HQ/Fighter Centre in Gothenburg Sweden. Below you can find an extensive interview with Conor.

Who is Conor Mc Donagh?
My name is Conor mc Donagh and I am 36 years old. I am a Strength and Conditioning coach from Dublin, Ireland. I live in Göteborg. and have a Swedish wife and 2 children. I am a keen training enthusiast with a passion for all sports, but having an extra passion for combat related sports, especially MMA and Rugby union. In my past I have played Gaelic football, Boxing and Rugby and over more recent years participated at a beginners levels in Brazilian ju-jitsu and submission wrestling.

What is your background?
As stated, I am a strength and conditioning coach. I have a university degree in Sports Strength and conditioning, and I will begin my Master of Science in Strength and conditioning /Applied Sports Science in December of this year. I am also currently completing an EXOS performance specialist course and am a person who always stays updated in my field with aggressive continued professional development. I have worked in many different sports at many different levels both regionally and at national levels. These sports include Gaelic Football, Rugby, Weightlifting, Rugby Sevens, Track and Field and now Mixed martial arts. Here in Sweden I have worked for the Svenska Rugby Förbundet as a national strength and conditioning coach. I have also worked for the Romanian Rugby union and Danish rugby union. During my time in rugby I also became an official coach educator in Strength and Conditioning for World Rugby educating all of Europe and Oceania best performance coaches. Regarding MMA, I have been a long serving spectator of the sport as in Ireland we have a strong heritage of fighting/combat sports. Strength and conditioning in MMA in Ireland is a fast developing area, which all Irish fighters in the UFC have as part of their weekly training and physical development.

What exactly does a Strength & Conditioning Coach do?
A strength and conditioning coach primary responsibility is basically using the techniques and systems of applied sports science. Overseeing the general athletic preparation and performance of individual athletes and as an overall group are the main responsibilities. Systematic training structure and preparation in general elements in athletic preparation include, Advanced strength and Power training systems, Applied Neuroscience, Coaching skills, Movement preparation and development, Systematic energy system development, Sports psychology, Screening, Postural correction and athletic testing. As this may sound quite technical, small changes and general progressions are made to start, and building a stable systematic platform is where any foundation should start.

How did you come in contact with Fighter Centre?
I first came into contact with August Wallen, whom is head coach at the FC about 3 months ago. MMA is an area that is developing very fast in the sports science world, and on meeting August for the first time, this was one of the first things that he said to me. It is not very common in many sports that head coaches can recognise the importance of professional systematic structure in training and this was something that August was very aware of and understood very well. We both shared very similar opinions and goals in wanting to create a High performance environment, so this is something we have been planning for over the last 3 months.

What’s your view on Fighter Centre?
In my opinion, to be a champion, you must train like a champion and this involves creating the environment to do so for your athletes. The Fighter center is a fantastic facility and really is one of the best training facilities for Combat sports in Europe. This is a professional center and you only have to walk into the facility on any weekday/evening to see this. There is a very high skill level and very highly skilled coaches from what I have seen to date. To have a systematic training structure is very hard to create and this is the real deal. You get this in the FC. When training doesn’t have structure, its taking what is called a shotgun or mixed methods approach. Methods are fine to a point but systems and structure are always what will give best results. I have a simple methodology when it comes to this ; failing to plan, is planning to fail.

What responsibilities will you have?
My responsibilities will be overseeing general and specific athletic preparation and daily systematic structure of training and recovery systems. As this is a competitive club and fighters are of a high skill level, specific preparation for competitive fights and tournaments will be a prime responsibility. I will work alongside the head coach (August Wallen) by preparing the athletes both physically and mentally in all aspects to the general training environment in regards to preparation and recovery and this is for athletes of all levels. This is a service that is only available at FC and it really shows the ambitions and potential the club really has. I am very influenced by regeneration and recovery methods and educating the athletes on what “best practice” really is. These small things are what is that extra 10% that goal orientated athletes do to achieve satisfaction and enjoyment and get most benefits of their training.

How will you help the athletes?
In conjunction with the head coach and other coaching staff, we will be offering athletes a chance to develop in their sport and to develop better as an athlete and person. For a coaching team to properly function, its takes effort from both athlete and coach. Understanding that most athletes have 8-4 day-jobs, 5 days per week, I will be able to make the stresses that come with training that little bit easier. This involves more practical and careful planning and structure of what we already do on a day to day basis. Professional and amateur development not only comes with correct training systems but also it is a combination of what we do in our free time that can make those small differences. Sometimes people think that sports science or strength and conditioning is something that is only applied for professional athletes, but in getting the things we already do, done properly, we can make a lot of progress. Ill be around the gym a lot so people are more than welcome to come and introduce themselves and ask questions on areas they are unsure of.