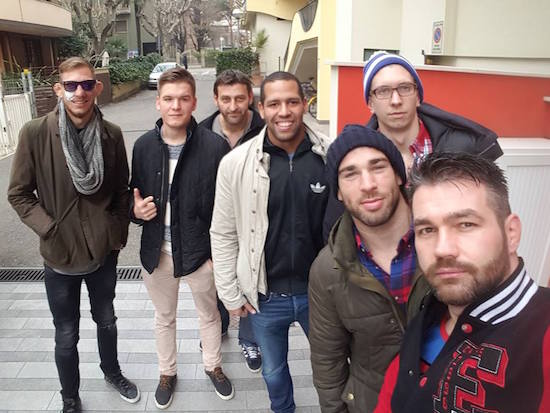 Hard day at the office for Jack Mason

Jack ‘The Stone’ Mason from BKK Fighters in UK fought at Venator FC #2. Mason started of strong but was unfortunately caught by a knee in the first round.

Venator FC #2 took place in Rimini Italy on the 12th of December. Jack Mason fought Marvin Vettori. Unfortunately Mason was caught by a knee in the first round, a knee that sent him to canvas and the fight was stopped. Mason claimed he was fine to continue the fight but the referee made another call and stopped the fight.

As reported earlier Luke ‘Bigslow’ Barnatt from Tsunami Gym conquered the Venator FC Middleweight belt at the same event and on the picture you can see him far left and Jack Mason second from the right. Well done to the Shooters MMA Team crew from UK!