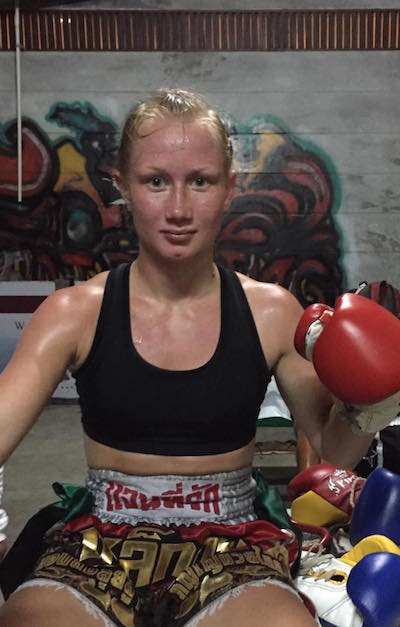 Several fighters from Fighter Muay Thai takes the chance to travel to Thailand for training and competing during the summer vacation. Here is an update.

Both Alexander Welin and Madeleine Kettner, who train at Kaewphitak Muay Thai, fought at Bangla Stadium on the 13th of July. Madeleine faced Yasmin from ”PTT” (link). It was a close fight but in the end, after 5 rounds, Yasmin got the win by judges decision. Alexander won his fight against a fighter from Thailand by KO in the first round (link).

Malin Dahl also fought recently. She faced a fighter from Thailand as well. It was another close fight and when Malin put some more pressure on the thai she got caught by an elbow. The fight continued for a while but was stopped by the referee due to too much blood from Malin’s cut (9 stitches).

Billy Bengtsson has had a longer break from competing but while in Thailand he went for a comeback. He fought a fighter from Denmark and won after a strong and impressive fight. The fight took place at Grand Thaiboxning Gym & Stadium in HuaHin, Both Malin and Billy train at Sitjaopho Muay Thai.

Ellinor Ekström (picture), is right now in Surat Thani. Ellinor travels to train and fight in Thailand a lot! She also won her last fight which she now adds to her long list of fights in Thailand.