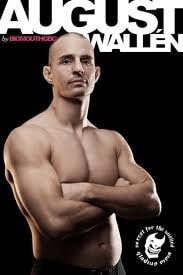 Read more voices about August as a person, pioneer and leader and his achievements for the sport at IMMAF.org.