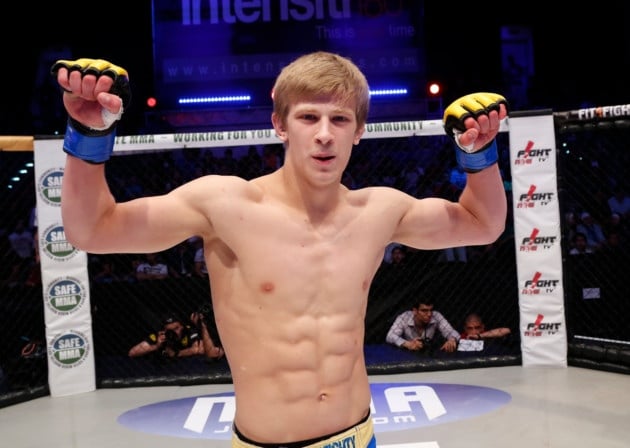 Watch the video of Arnold Allen from BKK Fighters in the UK dominating Gaetano Pirrello at the recent Cage Warriors 71 event in Jordan, earning a wide unanimous decision victory.

Article and interview from IpswichStar:

Rising Suffolk mixed martial arts star Arnold Allen is back in the win column after suffering the first loss of his career – and now plans to take a run at the Cage Warriors featherweight title belt.

It came after Allen – nicknamed ‘Almighty’ – endured the first defeat of his young career in a thrilling back-and-forth battle with Marcin Wrozek at Cage Warriors 69, which saw him on the wrong end of the judges’ decision.

The young fighter, hotly tipped for future stardom in the UFC, said he learned from that experience and returned to the cage against Pirrello wiser – taking him down at will and landing heavy elbows and punches in a totally dominant display.

Though that was the last fight of his Cage Warriors contract, Allen – whose record now reads eight wins and just one loss – is confident of signing another shortly, and plans to earn a shot at the currently vacant featherweight title belt.

“I was really happy with it,” he said of his win over Pirrello. “I didn’t really have a gameplan for this guy, I just wanted to go with the flow and he felt like quite a good guy on the feet so I didn’t want to take any risks.

“It’s a relief to get back in the win column!”

“My contract with Cage Warriors is up now but I’m pretty confident I’ll get a new one. It’s a huge promotion, especially in European MMA, and the fact that their shows are now being shown on Channel 4 is huge exposure both for the promotion and the sport.

“I’d like to fight again before the end of the year – there’s a show on November 15 at the Copperbox Arena in London that I’d love to get on – and I think I’m probably two or three wins off a title fight.

“I’d love a rematch with Wrozek – it would be nice to get that loss back.”

Allen is now back in full time-time training – a gruelling regime which sees him train every day, up to three times a day, to ensure he’s sharpening his MMA tools in a sport which combines boxing, wrestling, Muay Thai and jiu jitsu.

Indeed, even on his ‘day off’ he regularly spars with top pro boxing prospects including the unbeaten Nathan Dale at Norwich’s Kickstop Gym.